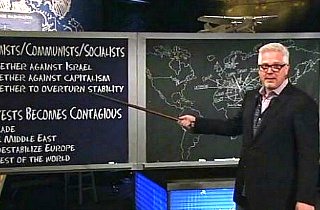 About the last thing that came to mind when I watched an advertisement for the soft drink Coca-Cola on Sunday night featuring a number of performers singing “America the Beautiful” in a variety of different languages was that it was an “in-your-face” attempt to “divide people.”

That was, however, the impression that conservative radio host Glenn Beck, and a handful of other pundits were left with.

On his radio show Monday morning, Beck went on to claim that the subliminal message being promoted by The Coca-Cola Company was one that would result in the dilution of American culture. “And if you don’t like it, if you’re offended by it, then you’re a racist,” he added. “If you do like it, you’re for immigration, you’re for progress.”

“That’s all this is, is to divide people,” he continued.

There is no sigh heavy enough to relieve one of the frustration and angst this sentiment inspires in the listener. One wonders if Beck has ever seen a Coke ad before. If so, maybe he could share his thoughts with us on the 1971 classic featuring a multiracial cast of Americans singing, “I’d Like to Teach the World to Sing.” Surely, a subversive masterpiece cooked up in the Kremlin with the unrealized design of igniting a long-delayed race war if I ever saw one.

In May of this year, Beck regretted the fact that the much of the media has labeled him a “conspiracy theorist.” While the political press is often guilty of allowing a preferred narrative to shape and frame reporting, this is one case where the media has been correct to apply his indelible label.

That lamentation was made in the wake of an especially embarrassing incident in which Beck repeatedly insisted that evidence existed linking a college-aged Saudi citizen to the April, 2013 Boston Marathon bombings. He further insisted that, in spite of a lack of publicly available evidence, that the White House and the State Department suppressed any investigation into this Saudi student in order to preserve America’s ties with Riyadh. “They’re hiding the Saudi connections,” Beck insisted.

With Beck’s credibility severely damaged, the conservative broadcaster has engaged in a rehabilitation effort of sorts. He has softened his rhetoric recently and, in an interview with Fox’s Megyn Kelly last month, he bemoaned his own role in dividing and fracturing the country along ideological lines during his tenure as a Fox News host.

“I wish I could go back and be more uniting in my language because I think I played a role, unfortunately, in helping tear the country apart,” he said.

Apparently, Beck’s approach of keeping the country whole and united includes a mildly xenophobic verbal assault on bilingual Americans and non-English speakers. His overstated reaction to a perfectly harmless ad furthers the impression –- one seized upon by Democrats and progressives -– that the GOP and its conservative allies are hopelessly nativist, antagonistic toward immigrants, and generally hostile toward minorities.

Beck is self-aware enough to know when he is doing damage to both his brand and that of conservatism. When The Daily Beast’s John Avlon insisted, in a particularly unbecoming fashion, that Beck’s mea culpa was dishonest and that he was both unwilling and unable to change his own behavior, I defended Beck. This, I wrote, was an unfair characterization of the host and Avlon’s eagerness to condemn Beck displayed a lack of temperance.

But it is today clear that Avlon had a point, though he made it prematurely and without requisite supporting evidence. Beck seemingly cannot help himself but engage in conspiratorial thinking. And what is more conspiratorial than suggesting that this harmless Coke ad is part of a campaign designed to advance a progressive agenda with the perhaps unintended-yet-welcome side effect of impugning the host and his like-minded listeners as a “racist”?

Beck regularly displays smart business instincts. He was among the first to attempt to capitalize off an ascendant strain of libertarianism among young news consumers –- a trend now being pounced upon by mainstream media outlets like the Washington Post and Fox. But his journalistic instincts are embarrassingly weak by comparison.

Beck can do quite a lot of good if he would finally internalize those happy bromides he embraces about uniting the country by tamping down his own rhetorical excess in one of his regular apologetic sermons. So long as the popular conservative host continues to embrace conspiracy theories, however, he will and should be branded a conspiracy theorist.

It seems Beck hates that label, but he just can’t help but earn it.

Watch the offending Coke ad below: