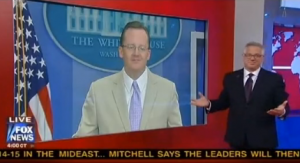 As the debate over whether or not President Obama is a Muslim has gone away, it has been replaced with the debate over whether or not the form of Christianity that he practices is a mainstream one. One of the biggest proponents of the belief that it is not has been Glenn Beck who has been challenged over his comments from the likes of Bill Press as well as Robert Gibbs. Yesterday on his show, Beck responded to Gibbs.

Beck showed a clip of Gibbs answering a question from Bill Press that he doesn’t know how Beck would have any knowledge of what the president believes. The heart of the exchange is as follows (transcript provided by Newsbusters)

ROBERT GIBBS: I don’t know the answer to that. I will say this, Bill, um, a crude paraphrasing of an old quote, and that is, people are entitled to their own opinion, as ill-informed as it may be, but they’re not entitled to their own facts. The president is a committed, mainstream Christian. I don’t, I have no evidence that would guide me, as to what [whether?] Glenn Beck would have any genuine knowledge as to what the president does and does not believe.

Beck had a little fun mocking the way Gibbs stumbled in his response (which seems a bit unfair, it’s not like he’s Jan Brewer) and then got down to business. He showed clips of Black Liberation theologist James Hal Cone, talked about Jeremiah Wright, and ended with a clip of Father Michael Pfleger yelling about Wright. Beck said he wasn’t sure, but he didn’t think most churches were like that.

Meanwhile, Press and Beck find themselves in a debate over religion, theology and, of course politics, which has included Press questioning Beck’s knowledge of “the Gospels” because he’s a Mormon, and has culminated in Press challenging the white-hot media personality for a debate over religion. Perhaps it’s worth noting that any controversy between Beck and Press is a huge publicity win for Press.

It’s hard to say whether many churches are like Pfleger’s in the clip, but one thing is sure; as this Christian on Christian debate rages on, I bet Muslims are pretty glad to be out of the conversation for a while.