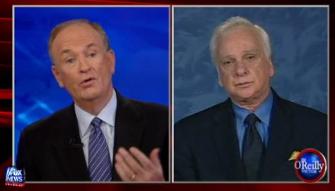 Something happened on Fox News’ The O’Reilly Factor last night that rarely occurs in cable news – criticism of a network, on that network. FNC Contributor and weekly Factor guest Bernie Goldberg was on with Bill O’Reilly, and played the role of ombudsman.

The conversation highlighted the main criticism with Fox News and their opinion ‘journalists’, while also showing what separates O’Reilly from his fellow FNC hosts.

O’Reilly started the segment with a premise: “Never in the history of broadcasting in this country has one network, Fox News Channel, been attacked been attacked so unrelentingly as this one has. Why?”

Goldberg continued later. “They pretend to be a journalist, and at the same time they’re saying, ‘I’m not a journalist,'” he said. “They go on the air after they give their opinions, which is fine with me, they then state as facts things that aren’t facts at all.”

“That’s legitimate, and that should be criticized,” said O’Reilly. (For what it’s worth, they both agree personal attacks should be out of bounds.)

NEXT: What, and who, Goldberg was referring to.