GOP Congressman To Soledad O’Brien: ‘We’re Not Trying To Solve The Fiscal Cliff’ 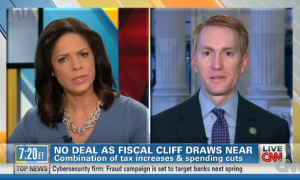 Rep. James Lankford (R-OK) spoke to Soledad O’Brien on Starting Point this morning — about none other than the fiscal cliff negotiations. “We’re not trying to solve the fiscal cliff,” he said. Their focus is the debt and deficit.

Lankford said he wasn’t surprised by the poll showing a majority of Americans want Republicans to compromise. “They identify this 2 percent and say raise it on them and not on us,” he said. “So that’s not surprising.” But they’re also beginning to the see the three things “that are hitting” at the same time: the Affordable Care Act, “rate increases from the last lame duck,” and trying to reduce spending.

O’Brien then pointed to a poll that showed a majority of Americans believe President Obama has a mandate. She asked, “How does that make you change how you see your position as you go into the negotiation along with the fact, right, that everybody’s taxes are going up anyway at the end of this year?”

“And so our challenge is this: we’re not trying to solve the fiscal cliff; we’re trying to solve the debt and the deficit,” Lankford replied. “That’s the bigger issue. The president’s proposal was let’s raise taxes on the wealthiest Americans, which raises about $80 billion. Well, that still leaves us $920 billion to go to get through this deficit. So the president’s proposal is not serious to actually solving the problem.”

“Do you have leverage on this?” O’Brien asked. “If our taxes are going up at the end of the year, right, no matter what you do, regardless of whether you go home to Oklahoma, you stay, taxes are going up on everybody. And I’m sure that nobody wants to be holding the bag on raising taxes on the middle class.”

“Our leverage is only the American people because, again, you quoted some of the polls about tax increases,” he said. “You can also look at all the polls and they say they really do want this balanced approach.”