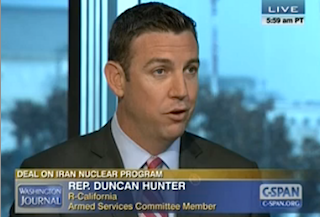 Rep. Duncan Hunter, Jr. (R-CA) appeared on C-SPAN’s Washington Journal Wednesday morning and expressed some stark “generalizations” about Middle Easterners in reference to the United States’ negotiations with Iran over that country’s nuclear development. People in that part of the world always want to “get the best deal possible no matter what it takes,” he said, and “that includes lying.”

Hunter’s comments came in reference to a caller from Iowa who said the Iranians have a “radical, religious way” of negotiating in which it is “honorable and heroic to successfully lie and deceive the infidels,” in this case Americans.

The congressman agreed with the caller’s assessment, but broadened the characterization beyond just Iran. “In the Middle Eastern culture, it is looked upon with high regard to get the best deal possible no matter what it takes, that includes lying,” Hunter said.

Host Greta Brawner attempted to get clarification on whether Hunter was referring to “all Middle Eastern countries.”

“It is part of the Middle Eastern culture to get the best deal that you can,” he reiterated, citing examples like bartering for vegetables and shoes at markets. “People barter back and forth and try to get the best deal for each other. Iran is the epitome of that, they have lied over and over. They are liars. The Iranian government lie all the time. So, why trust them now?”

“Are you speaking from personal experience, talking about all Middle Eastern countries?” Brawner asked.

At this point, Hunter began walking back his statements. “From personal experience, so I would say not necessarily all Middle Eastern countries. I know that’s a big generalization,” he said, before repeating his point once more. “They do business different than we do business in the West. they have markets, they like to barter, they like to do whatever they can and say whatever they can to get the best deal.”

Brawner reminded viewers that Hunter served two tours in Iraq, so he has personal experience in at least one Middle Eastern country.

Earlier in the interview, Hunter argued against sending ground troops into Iran and said he instead favored the use of “tactical nuclear devices” in order to “set them back a decade or two or three.”