GOP Strategist On MSNBC: Why Bring Up Bachmann’s Migraines If No One Talks About Obama Smoking 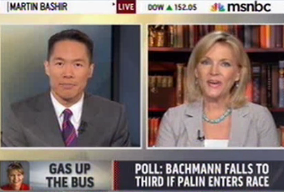 Republican strategist Cheri Jacobus appeared on Martin Bashir‘s show with guest host Richard Lui to discuss a new poll analyzing Sarah Palin‘s potential entry into the presidential field. The results suggest Palin could mean serious trouble for Michele Bachmann. Jacobus not only was disturbed by the constant fascination of “trying to pit two women against each other because of their gender,” but also was annoyed that Bachmann, unlike male candidates, must deal with questions about her health and fitness.

Jacobus thought that everyone “making a big deal about migraines” was a “dog whistle” for the whole gender issue. Especially given that other male candidates didn’t suffer through the same scrutiny in the past despite their health issues. For instance, former Vice President Dick Cheney had various heart problems, Vice President Joe Biden had two life-threatening brain aneurysms, and since:

“We have a President who is turning 50 and he still is smoking. And if you’re President of the United States and you can’t kick the habit, you probably have a serious habit. That’s a serious health issue. If we’re going to do this, let’s look at everybody.”

Bachmann being held to a higher standard is simply because she is a woman, Jacobus argues. Yet as some have already noticed, much of the criticism of Bachmann is coming from conservatives who might be looking to attack her, not because her of her gender, but simply because they are scared she might actually win.