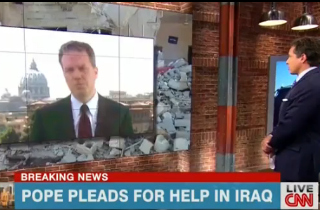 An interesting tidbit from Friday morning Twitter: CNN anchor Chris Cuomo admitted he shows “deference” to all public officials while addressing their spokesperson. Several other journalists, including Glenn Greenwald, pounced on him for the comment.

The exchange began when an anonymous Twitter user lamented that Cuomo had acted “self-important” on Friday morning’s New Day by asking Vatican spokesman Greg Burke to send the show’s regards to the Pope:

@ChrisCuomo @Pontifex When u send personal regards to Pope, beginning to sound self important. Love u, hate this trend.

Cuomo responded that it’s the “opposite” of self-importance:

.@toughcook it is the opposite of self-importance. i show deference to all officials when addressing their spox. dont read into it.

Journalist (and occasional Mediaite contributor) Michael Tracey noticed the tweet and, despite Cuomo’s warnings, read into it:

CNN host @ChrisCuomo on his journalism philosophy: "i show deference to all officials when addressing their spox" https://t.co/zd38jKwadu

Cuomo fired back that he simply meant he shows “respect for the office,” but Tracey honed in on the anchor’s peculiar use of the word “deference”:

Not satire: just incredibly candid RT @ChrisCuomo i show deference to all officials when addressing their spox. (via @mtracey)

Cuomo said not to read too much into his words, but it’s difficult to avoid when a TV star is so candid. The media is normally supposed to act as a check on authority, giving voice to the voiceless and speaking truth to power in exposing wrongdoing or questioning motives. Respect the office, sure, but “deference” — i.e., humble submission? Perhaps not the best word choice.

The problem is that, as we see too often on cable news shows like Morning Joe, respectful deference to public officials almost always turns into affection and possible protection.

Telling a Vatican spokesman to give your regards to a powerful figure like the Pope is perhaps reminiscent of that; and also a bit self-aggrandizing.

.@ggreenwald as u know, extending regards to an official is not the same as giving them a pass. I think my intvs show that