Grover Norquist At CPAC: ‘The Left Is Made Up… Of Competing Parasites’ 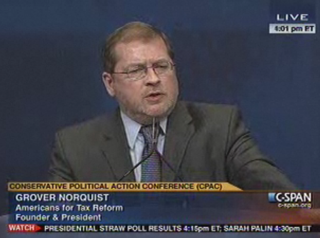 Tax reduction crusader Grover Norquist took the helm at CPAC earlier this evening with a fiery speech reminding CPAC attendees to keep their eye on the ball in reducing taxes and giving them a game plan as to how to promote conservatism to the best of their ability. The plan included plenty of what one would expect: refusing to sit at the table with Democrats to increase taxes and going on a state by state plan to flip Democratic leadership in each of the “fifty of fifty-seven states, who’s counting?”

Norquist celebrated that the rise of aggressive conservatism had cornered the American Left. “Now they’re wondering who they’re going to eat or throw overboard,” he joked, adding on a serious note that “the left is not made up of friends and allies, it is made up of competing parasites.” He noted that their successes came from bring Republicans to the table. “In 1982, they lied and fooled Ronald Reagan,” he argued, whereas “in 2011, they weren’t able to talk the Republicans into swallowing their own tongues and committing suicide.”

Norquist gave a few thank yous to the “5th and 6th waves of immigration into our party,” the Rep. Ron Paul inspired Tea Party and the more socially conservative Tea Party, which he was happy to welcome. He told the crowd that, just as Walmart doesn’t get upset when new people come into their parking lots, so too Republicans shouldn’t be worried to see new faces or ideas. But one idea Norquist refused to entertain was the idea of raising taxes. “You cannot solve a problem with too much spending by raising taxes,” he argued, and laid out a plan to regain the state governments for the GOP, while following up with a reminder that a tax on smoking disproportionately hurts the lower classes.

Watch the speech via C-SPAN below: