Hannity Panel Blows Up Over ‘Obamaphones’: ‘Let Me Finish, Then You’ll Be Educated On Something!
video

Hannity Panel Blows Up Over ‘Obamaphones’: ‘Let Me Finish, Then You’ll Be Educated On Something! 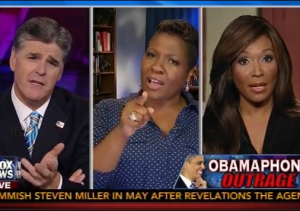 Sean Hannity tonight revisited the “Obamaphone” controversy that first popped up during the 2012 campaign with the release of a YouTube video showing a woman bragging about minorities being given “Obamaphones.” The panel discussion took a turn and devolved into a shouting match with one of the panelists shouting at the other, “If you let me finish, they you’ll be educated on something!”

Hannity noted how a National Review writer applied for an “Obamaphone,” and despite not qualifying, she received three. Jehmu Greene laughed because, as she explained, the program has been going on for over a decade, claiming “Obama has nothing to do with it, there’s no taxpayer funding involved in it.” Angela McGlowan asked, “What world are you living in?”

When Greene replied, “the real world,” McGlowan tried to interject, eventually shouting, “If you let me finish, then you’ll be educated on something!” She argued that the incredible amount of money involved increased under Obama, while Hannity kept demanding to know exactly who’s paying for it. Greene explained it’s derived from a cell phone fee, insisting it’s “not a federal government program.”

Greene went on for a bit, leading McGlowan to snipe, “Do your monologue, sweetie, go ahead!” All three ended up shouting over each other, with Greene describing Hannity and McGlowan’s argument as “downright kinda dirty,” and McGlowan asking her, “Why don’t you debate yourself next time?”