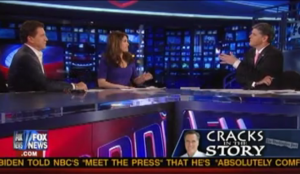 In light of The Washington Post‘s story about Mitt Romney‘s high school bullying, Sean Hannity‘s panel on Thursday took a look at President Barack Obama‘s past — namely, pointing out that Obama admitted to being a bully in school in his book.

Obama as a “worse record” on things like drugs and bullying, Hannity said. Not to mention, he said, the story isn’t solid, with one source saying he didn’t personally witness the incident with Romney. On the flip side, we have someone who’s just flat-out admitted to bullying: Obama.

The bullying excerpt in question, from Obama’s Dreams from My Father:

There was one other child in my class, though, who reminded me of a different sort of pain. Her name was Coretta, and before my arrival she had been the only black person in our grade. She was plump and dark and didn’t seem to have many friends. From the first day, we avoided each other but watched from a distance, as if direct contact would only remind us more keenly of our isolation.

Finally, during recess one hot, cloudless day, we found ourselves occupying the same corner of the playground. I don’t remember what we said to each other, but I remember that suddenly she was chasing me around the jungle gym and swings. She was laughing brightly, and I teased her and dodged this way and that, until she finally caught me and we fell to the ground breathless. When I looked up, I saw a group of children, faceless before the glare of the sun, pointing down at us.

The chants grew louder as a few more kids circled us.

“She’s not my g-girlfriend,” I stammered. I looked to Coretta for some assistance, but she just stood there looking down at the ground. “Coretta’s got a boyfriend! Why don’t you kiss her, mister boyfriend?”

“I’m not her boyfriend!” I shouted. I ran up to Coretta and gave her a slight shove; she staggered back and looked up at me, but still said nothing. “Leave me alone!” I shouted again. And suddenly Coretta was running, faster and faster, until she disappeared from sight. Appreciative laughs rose around me. Then the bell rang, and the teachers appeared to round us back into class.

Hannity added that the press had to go all the way back to the 1960s to find something to “smear” Romney with, and even then, the story isn’t air-tight.

By contrast, few questions have been asked about Obama’s past in regard to his drug use, etc., Hannity said. To that, Eric Bolling added that there are fair questions to be asked. But alas, the panel noted, there’s no lengthy story about Obama’s bullying past.

“They refuse to cover it,” Kimberly Guilfoyle said. “They’re campaign headquarters for Obama.” Bolling added that The Washington Post’s “hit piece” is “orchestrated.”

“This is completely in line with this whole, ‘This is how we’re gonna lay this gay marriage issue out,'” Bolling said.

The panel also agreed that there are holes in the Romney story, particularly in terms of the sources the information is coming from. Simply put, Bolling emphasized, it’s “a perfect hit piece.”