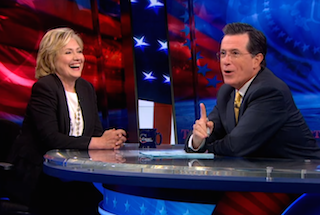 : The Colbert Report. The former secretary of state remedied that last night by making a surprise mid-show appearance to engage in a name-drop-off with Stephen Colbert.

Colbert spent a couple of minutes playing clips from the audiobook version of Clinton’s new memoir, before a smiling Clinton emerged from the side of the stage to confront the host about his criticism. “Don’t you dare!” Colbert admonished his audience as they began to chant “Hillary! Hillary!”

From there, the two engaged in a name-dropping battle that included celebrities like Tom Hanks, George Clooney and Meryl Streep along with Ecuadorian President Rafael Correa and Afghan President Hamid Karzai.

Clinton even had a thoughtful answer for this “real hard choice” proposed by Colbert: “Which would you rather fight? One horse-sized duck? Or a hundred duck-sized horses?”

While Hillary Clinton may have gotten the “Colbert Bump” last night — and looked to having more fun than in any of her previous book-tour interviews — The Colbert Report did not take advantage of the “Clinton Bump.” By neglecting to heavily promote Clinton’s appearance, the Comedy Central show must have figured that any ratings increase would be fairly insignificant.

When Clinton granted some of her first cable news interviews to Fox News and CNN, the ratings were underwhelming to say the least. When she appeared on The Daily Show last month, the show drew 1.441 million viewers and a 0.5 rating in the 18-49 demo, lower than the show’s weekly averages for July.