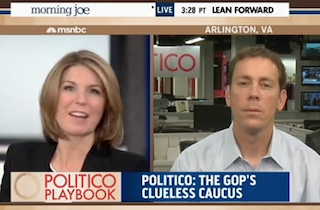 On Wednesday’s Morning Joe, POLITICO’s Jim VandeHei joined the crew to discuss their story about the GOP’s “clueless caucus” — prompting former Bush adviser Nicolle Wallace to push back against the narrative about Republicans Who Say Ridiculous Things. The media is obsessed with them, she argued, while there are prominent Republicans working on important issues.

Since the election, VandeHei noted the GOP has been grappling with how to deal with “members of Congress who say bombastic things, that become a huge distraction for the party.” There are the Akin comments, the comments that remind us of Akin, the use of the term “wetbacks,” etc. “These things become controversies, distractions for the party,” he added, “and the party leadership is really wrestling with: How do we silence these guys?”

Those outliers have become the face of the party, Willie Geist chimed in, noting that theoretically it’s House Speaker John Boehner‘s job to rein them in. But Boehner isn’t a strong speaker, VandeHei added — and even if he were, those Republicans don’t care about the leadership. Their constituents often like the “incendiary” comments.

At that point, Wallace weighed in to counter that argument.

“One of the frustrations that Republicans have is those of you in the media are obsessed with these members — who I think even you can admit — none of them are, as you said, leaders in the Republican party,” she argued. By contrast, she offered, if we look at immigration, no elected official is more important to the effort than Sen. Marco Rubio (R-FL). “Plenty of Republicans leading on important difficult issues, but you guys remain focused on their gaffes and ridiculous statements.”

VandeHei felt the point was “fair,” but that not much could stop the media from covering the gaffes. Not all of them are “backbenchers,” however, he argued. Many are “powerhouses” (with a quip about Sarah Palin, whom she worked for) who became the “biggest distraction” for the GOP.