How To Ruin An Olympic Opening Ceremony
video

How To Ruin An Olympic Opening Ceremony 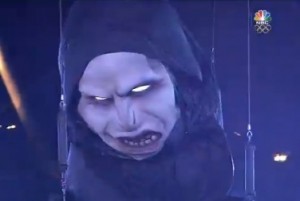 You’re speeding across the surface of the Death Star as blaster hits explode all around you, taking out your ragtag comrades like so many mynocks. Suddenly, Han Solo‘s Millenium Falcon swoops in to dispatch the TIE fighters pursuing you, sending Darth Vader‘s customized ride hurtling into space like a wayward dreidel. A lone X-wing fighter is making the final trench run that will redeem the lives of countless Bothan spies (and your best buddy, Porkins), when you hear this:

MATT LAUER: As you may recall, Luke Skywalker hails from Tatooine’s agricultural sector, which he abandoned to pursue a military career. Right now, Skywalker is attempting to start a chain reaction by firing two proton torpedoes into an area about the size of a womp rat…

MEREDITH VIEIRA: Womp! There it is, Matt!

In case you missed it, that’s exactly what it was like to watch Friday night’s coverage of the 2012 Olympic Games Opening Ceremony.

In last night’s Olympic opening ceremony, Slumdog Millionaire director Danny Boyle produced what just might be the most spectacular piece of live storytelling the world has ever seen. At least, I think he did, because I kept being pulled out of the performances by observations like “these dancers, they’re good,” and “you mention those volunteers, Matt, make sure the audience knows they are not getting paid.”

Granted, some of the narration was useful, such as the various factoids about the performers, like deaf Scottish percussionist Evelyn Glennie, but given the show’s heavy use of mood and crescendo, even those would have been better delivered via unobtrusive onscreen text. The transformation of the stadium, from expansive, pastoral countryside to Industrial Revolution Olympic ring foundry, was magnificently, earnestly performed by a cast of thousands, propelled by a powerful musical score, and managed to be at once beautiful, yet gritty and unflinching.

Also helpful was the narration of Boyle’s celebration of the National Health Service, which might well have otherwise been lost on the American audience, but when the interpretation of bedtime stories turned evocatively nightmarish, it’s a good bet that everyone watching was aware that the giant Voldemort puppet was really tall, without Meredith Vieira chirping “Voldemort is 100 feet tall.”

The Lauer/Vieira Effect was, perhaps, best exemplified when, as the epic battle of Voldemort versus a cadre of Mary Poppinses (Mary Poppi?) wound down, and the performers formed the giant, ghostly image of a sleeping infant, at the very culmination of the spectacle, Lauer intoned, “I don’t know whether that’s cute, or creepy.”

In fairness, the apparition did bear a passing resemblance to the dead baby from Trainspotting, but that tug-of-war between terror and delight was, in fact, the entire point of the piece. It’s like someone springing out of his seat toward the end of The Sixth Sense to exclaim “Earth to Bruce Willis: you’re dead!”