If Bill Maher Made The Same Controversial 9/11 Comments Today, Would He Have Lost His Show? 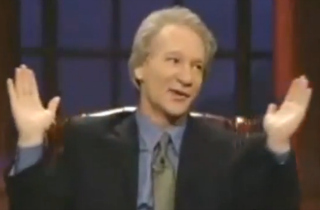 Less than a week after the terrorist attacks of September 11th, 2001, Bill Maher made controversial comments on his ABC late-night talk show that undoubtedly led to the cancellation of the program and his eventually moving to HBO.

During a debate about terrorism, Maher disagreed with President George W. Bush‘s characterization of the terrorists as “cowards” — noting that “we” (the U.S. military) have been the cowards for remotely bombing countries while the terrorists stayed in the very planes that crashed into the World Trade Center and the Pentagon.

“We have been the cowards, lobbing cruise missiles from 2,000 miles away. That’s cowardly,” Maher said according to transcripts (video below). “Staying in the airplane when it hits the building, say what you want about it, it’s not cowardly,” he concluded.

During such sensitive times, these comments understandably created a bit of a firestorm. Clearly distraught by the fallout, Maher dedicated the next episode (segment video below) to a frank discussion of his comments with some apologizing and clarification.

He noted that he was not trying to insult American soldiers, and that calling something “cowardly” is irrelevant to whether the action is morally right or wrong. Maher bemoaned the immediate post-9/11 environment that made him seem “anti-American” simply for expressing an unpopular view that was held by both he and his guests.

Conservative radio host Dennis Prager even agreed with Maher’s defense, telling him that he will defend him from critics claiming he is anti-military.

Nevertheless, the ABC show was briefly suspended and then eventually canceled. And Maher became forever attached to the controversial remarks.

Many, including Maher, have pointed out that the host unfairly took the fall for comments that were simply in agreement with the thoughts of others including conservative guest Dinesh D’Souza. Before Maher made the infamous remarks, D’Souza also disagreed with Bush’s “coward” characterization of the terrorists, saying:

Not true. Look at what they did. You have a whole bunch of guys who were willing to give their life; none of them backed out. All of them slammed themselves into pieces of concrete. These are warriors.

In that light, it’s fascinating that Maher became the subject of so much controversy while D’Souza was spared. Their comments practically mirror one another, with the key exception of Maher’s calling the American lobbing of cruise missiles to be “cowardly.”

Just last month, Maher had D’Souza on his HBO show and confronted him over this. He told the conservative author how “it could have been helpful” if during the national firestorm over his remarks, D’Souza had stood up to defend him since the two of them were originally just agreeing on the air.

D’Souza shot back that Maher’s real troubles were the result of his including the United States military in his comments — something D’Souza explicitly did not do. Clearly embittered by the experience, Maher was not convinced and expressed skepticism at D’Souza’s claims to have defended Maher on “free speech grounds” while doing media appearances in the following weeks.

ABC officially denied that the June 2002 cancellation of Politically Incorrect had anything to do with the previous year’s controversy, instead pointing to the show’s dwindling ratings. But there is no doubt the show took a serious blow from the firestorm.

Since then, times have certainly changed and many far more controversial things have since been said about the 9/11 attacks. And so the interesting question becomes this: Had Maher made those statements today, eleven years after the attacks, would he have received as much backlash, or would people have been more willing to hear him out? Keep in mind, he was on a broadcast network and not cable so it very well may have ended the same way today.

What do you think? Discuss below.