Iranian President: I Won’t Deny Holocaust Happened, It Was ‘Reprehensible and Condemnable’ 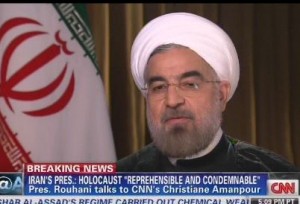 Iranian president Hassan Rouhani sat down with Christiane Amanpour in an interview that aired on CNN Tuesday night. In the interview, Rouhani talked about a new era of openness and collegiality between the United States and Iran, and unlike his predecessor, he said he does not question the validity of the Holocaust, condemning it as “reprehensible and condemnable.”

Rouhani started out by extending his greetings to the American people, saying they are “very dear and near to the hearts of the Iranian people.” He told Amanpour that he would have liked to meet with President Obama, but they didn’t have enough time to schedule it. He touted the changing environment that he believed would help usher in a new era of goodwill between Iran and the United States.

Amanpour brought up how Rouhani’s predecessor, Mahmoud Ahmedinejad, denied the Holocaust ever happened. This is what Rouhani had to say about the Holocaust.

“I’ve said before that I am not a historian, and that when it comes to speaking of the dimensions of the Holocaust, it is the historians that should reflect on it. But in general I can tell you that any crime that happens in history against humanity, including the crime the Nazis created towards the Jews, is reprehensible and condemnable. Whatever criminality they committed against the Jews, we condemn. The taking of human life is contemptible. It makes no difference whether that life is Jewish life or Muslim.”

However, he did say that past atrocities do not mean anyone would then have the right to “usurp the land of another group and occupy it.”