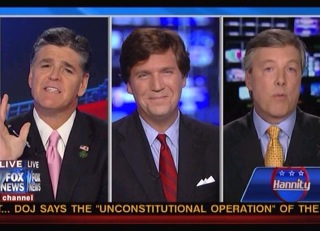 With Texas Governor Rick Perry‘s college grades out in the open, the question of whether he has the intellect for the nation’s top job was put on the table this morning, much to conservatives’ chagrin, by Politico, officially turning it into a campaign talking point. On his program tonight, Sean Hannity tried to turn the tables on those who would question Perry, asking his panel whether the media were missing the point that President Obama was the stupid one.

Hannity began by reminding his panelists, Daily Caller editor Tucker Carlson and Democratic strategist Steve McMahon, of the time the President mispronounced the term “Navy corpsman.” McMahon got the first word, and used it to attempt to deflect the question, but only managed to get Hannity more riled up. “I want to have my conversation!” he shouted, arguing that “if he’s such a genius, “he’d know what a Navy corpsman is.” McMahon repeatedly argued in response that President Obama was the President of the Harvard Law Review, eventually giving up: “I’m not going to sit here and have a conversation with you about whether President Obama is a smart man.”

Carlson then jumped in, adding that the point was not “what your credentials are” but the fruits of such, and the economy was in such a bad place that it was hard to argue he was still intelligent. That said, Carlson eventually admitted that “I would be satisfied with a dumb president” if he knew how to run the country, weighing in on the “corpsman” debate by saying, “I don’t think he’s lived in a world that’s inhabited by many corpsmen.”