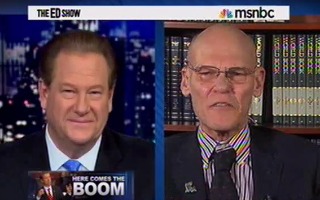 Democratic strategist James Carville joined MSNBC host Ed Schultz on Thursday to weigh in on Sen. Rand Paul (R-KY) and his 13-hour filibuster on Wednesday. Carville slammed Paul’s “nutty” actions. He linked Paul’s concerns about a letter from Attorney General Eric Holder in which he was informed that the White House could envision a scenario in which they conduct strikes in the U.S. against American citizens to “Birtherism,” as well as evolution and climate change deniers.

“Let’s remember, this is a party that vast numbers, vast numbers believe that the president was not born in the United States,” Carville said of the GOP. “Vast numbers think that the earth is 5,000 years old, that dinosaurs and people occupied the earth at the same time. Vast numbers deny climate change. I mean, they’ve got people like ‘preppers,’ and ‘Birthers,’ and God knows whatnot over there.”

Carville slammed the “clown outfit” conservative advocacy group FreedomWorks for supporting Paul’s bid to compel the White House to surrender information about the drone warfare program. He then turned to impugning the base of the Republican Party as being composed primarily of conspiracy theorists.

You’ve got 10 House members that are on ‘birther’ bills. You had half the Republican presidential field in 2008 denying evolution. I mean, the idea that this is somehow some just kind of nutty thing. This is a party — I’m not saying all of them, maybe not most –but vast numbers believe in some of the weirdest stuff that you can imagine.

“These are the same people that were buying gold bullion from Glenn Beck or whatever he was doing over there,” Carville concluded. “These people will bite on almost any kind of conspiracy that you put out there for them.”