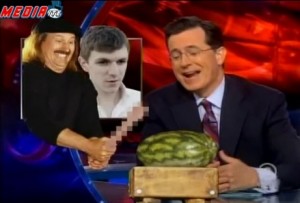 On Wednesday night’s Colbert Report, conservative auteur and would-be Bizarro Captain Stubing James O’Keefe came perilously close to ensnaring host Stephen Colbert into his latest sting, an email effort to defer the cost of his so-called NPR sting video through online donations. Colbert saw through the plea as a ruse to associate himself with an unsavory criminal element, but didn’t ask the obvious question: how did O’Keefe compose a five page fundraising email to pay for an NPR video, and not offer his donors a frickin’ tote bag?

With a track record like that, Colbert had little choice but to whip out his checkbook, to help O’Keefe and his Project Veritas (I do not think that word means what he thinks it means) recoup the $50,000 they allegedly spent on their lunch with NPR execs. Just as he’s about to sign the check, though, he wises up to O’Keefe’s latest prank, and thinks better of it: (from Comedy Central)

I don’t blame Colbert for being cautious, but O’Keefe’s work is too important to just give up like that. True, writing O’Keefe a check could possibly backfire, so I suggest, instead, purchasing NPR tote-bags, which can then be sent to O’Keefe, who can then turn them into quick cash on the open market. Winning!