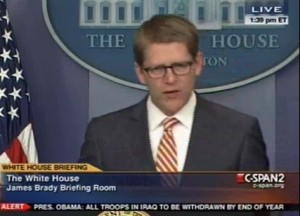 At Friday afternoon’s White House briefing, Press Secretary Jay Carney responded to a story that’s scorching up the conservative blogosphere as the next Solyndra-style “scandal” to emerge from a loan guarantee program begun by George W. Bush, and expanded by the Obama administration. ABC News‘ Jake Tapper asked Carney to respond to his network’s report on a $529 million loan guarantee to a company called “Fisker,” that is producing an electric car in Finland.

According to ABC News’ report, the production of Fisker’s first line of the Karma electric car will occur in Finland, which is the crux of the burgeoning outrage about the loan guarantee. Tapper asked Carney, “I was wondering if you could comment on a Brian Ross report about a $529 million loan to a company called ‘Fisker,’ to make cars, but there was no facility in the United States that could make them, so they are being manufactured in Finland?”

Carney responded to Tapper with facts that were contained in Ross’ report, but ignored in breathless blog headlines like “Obama Admin Gave Half-Billion-Dollar Loan to Gore-Connected Electric Car Company to Build Cars in… Finland?”

He told Tapper that the funds from the loan, “as the CEO told ABC, will not be used for its facilities in Finland. There are already jobs on the ground in the United States, both directly at the plant in Wilmington, and at the headquarters on the West Coast.”

In a stroke of good press secretarying, Carney then used Tapper’s question as an opportunity to remind reporters of Republican opposition to the auto bailout, saying, “They opposed the President’s decision to insist on the restructuring of GM and Chrysler, for example, and to assist them in staying alive and saving more than 1 million jobs in the United States. We think that was the right decision to make, and we think helping other car manufacturers locate here or built here create jobs here is a good idea.”

All’s fair in partisan scandal-mongering, I suppose, but while conservatives root around renewable energy-related companies like Solyndra and Fisker, I can’t help but wonder if the rest of America has forgotten that the oil industry, barely a year ago, almost extincted all life in our oceans. Why isn’t that being factored into the equation in the pushback against these stories, or the Republicans’ plans to gut any and all regulations that might prevent it from happening again?