Joan Walsh: Liberals Criticizing Obama On BP Are Looking For A ‘Daddy’ 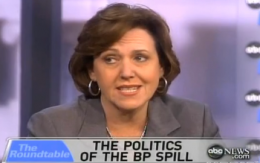 The secondary storyline this week with respect to President Obama and his handling of the BP oil spill appears to be how many Democratic stalwarts turned coat and began to loudly criticize the President in recent days. The charge began with Louisiana resident James Carville, and was quickly followed up by the likes of Chris Matthews and a number of Dem politicians. Today Maureen Dowd (typically) piled on in a column rife with daddy complexes addressed to ‘President Spock.’

Once more, he has willfully and inexplicably resisted fulfilling a signal part of his job: being a prism in moments of fear and pride, reflecting what Americans feel so they know he gets it….Too often it feels as though Barry is watching from a balcony, reluctant to enter the fray until the clamor of the crowd forces him to come down. The pattern is perverse. The man whose presidency is rooted in his ability to inspire withholds that inspiration when it is most needed….Obama invented himself against all odds and repeated parental abandonment, and he worked hard to regiment his emotions. But now that can come across as imperviousness and inflexibility. He wants to run the agenda; he doesn’t want the agenda to run him. Once you become president, though, there’s no way to predict what your crises will be

Hard to believe in all these years no one has thought to offer MoDo a talk show. Ed Morrissey thinks that all this hollering from folks “who sold their audiences on the near-perfection of Barack Obama [well notwithstanding Modo], are instructive moments to see just how far Obama has fallen in public reputation.”

Meanwhile, on This Week this morning Salon’s Joan Walsh — an early and enthusiastic supporter of Obama, herself, who was less than thrilled with the president’s abandonment of the public option during the HCR debates — suggested the nation should stop looking for a daddy.

We don’t need a president, apparently we need a daddy. There’s this great call for a daddy, especially among Liberals and I find it ridiculous. You’ve got Maureen Dowd today calling him Spock again, she loves calling him that; Arianna Huffington is calling him ‘nowhere man’ because he’s daring to see a concert honoring Paul McCartney, and I think it’s really it’s a stand-in for a sense of helplessness when we sit here…and there really was a pattern of negligence and there really was warning signs on that rig in the weeks and certainly months perhaps and that’s what we need to get to the bottom of, and I don’t care if he emotes, I don’t need a daddy, I had one, he was great.

She later noted Obama was not Jesus either. Watch below.