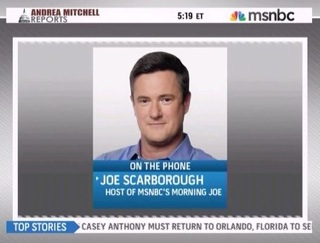 Joe Scarborough may have just come up with the worst possible backhanded compliment to Sarah Palin. Discussing her trip to Iowa with Andrea Mitchell on MSNBC today, he lauded her as “the one political star in the Republican Party right now” and for her “questionable ability to govern” and status as a “political superstar,” crowned her “the Republican Party’s Barack Obama.”

“She’s got star quality,” Mitchell noted as she observed the massive crowds following her in Iowa. Scarborough agreed enthusiastically, arguing that “of all the candidates in this race, there’s no doubt Michele Bachmann and Ron Paul excite their different bases, but there is one political star in the Republican Party, and that is Sarah Palin.”

He went on, sensing that what he was about to say would “engage both sides,” but made the argument that Palin was “the Republican Party’s Barack Obama”: “not a whole lot of experience in Washington before running in 2008, questionable abilities to govern based again on the fact that she was only governor for a couple of years in Alaska and Barack Obama was really only a glorified state legislator.” Nonetheless, he noted that they both had a similar ability to energize their base.

It’s a pretty brave comparison in that it’s fairly difficult to think of anyone on either side of the political spectrum that wouldn’t take some offense to it– likely most of all Texas Gov. Rick Perry, whose newfound status as frontrunner may be hindered if the belief that Palin is the only analog to the President– and thus the only one that can beat him– maintains any popularity.