John McCain Calls Bill Clinton ‘Gift That Keeps On Giving,’ Thanks CNBC For Having Him On
video

John McCain Calls Bill Clinton ‘Gift That Keeps On Giving,’ Thanks CNBC For Having Him On 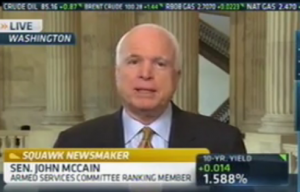 Bill Clinton‘s been making a lot of headlines recently — and he came up in conversation once more during Sen. John McCain‘s Wednesday morning appearance on CNBC’s Squawk Box. McCain noted Clinton’s “sterling” remark about Mitt Romney‘s business career, dubbing the Obama surrogate the “gift that keeps on giving.”

McCain was referring to Clinton’s CNBC interview yesterday, in which Clinton remarked on the Bush tax cuts, a segment that led many to say he again diverged from the president. (It’s worth noting that this wasn’t exactly a blatant opposing message like his Bain remarks, as Joe Weisenthal points out over at Business Insider.)

Co-host Joe Kernen replied, “I didn’t even come up with sterling.” Andrew Ross Sorkin then followed up, asking, “Do you really think that the White House calls up President Clinton and says, look, you can’t say this anymore?”

“I think they call his people,” McCain said — adding that it’s likely not direct contact. He went on:
Look, I’m very curious about this because the smartest pure politician that I’ve ever encountered is President Bill Clinton. And by the way, very the very smartest. I’m a little curious about these, quote, missteps that the day after has to be — or the damage control kicks in.

The senator heaped praise, but has clearly been enjoying the Clinton media frenzy.

Take a look, via CNBC: