McCain To Hannity: Pro-Obama Media Bias Is Just ‘Something We Have To Accept’
video

McCain To Hannity: Pro-Obama Media Bias Is Just ‘Something We Have To Accept’ 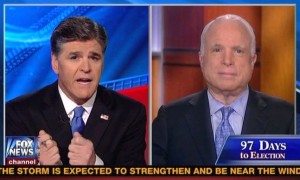 Senator John McCain experienced a quick blast from the past on Fox News today when Sean Hannity asked him about Dick Cheney‘s criticism of choosing Sarah Palin as his running mate, and about whether he thinks that the media has been biased in favor of Obama since the 2008 election. McCain dismissed Cheney’s criticism and said that the pro-Obama media bias is very real, but it is “something we need to accept.”

Hannity asked McCain what he thought of Cheney’s remarks that choosing Palin was a mistake. McCain said he doesn’t “see the point” in revisiting the 2008 election, affirming that he is still “proud” of Palin and praised “what she did for our party and for our ticket.”

They continued to reflect on 2008, with Hannity observing that Obama ran a rather negative campaign against McCain, which was not the perception for many people. He ran the clip of Romney being shouted at by reporters in Poland earlier this week followed by President Obama being heckled by The Daily Caller‘s Neil Munro in June, asking McCain if he thought the media is biased in favor of Obama, and if it was also true in 2008.

McCain acknowledged that the bias does exist, pointing to the negative portrayal of Mitt Romney‘s overseas tour as evidence.

“Well, I think that the media bias towards President Obama is just –- it’s something we have to accept. It’s just the air we breathe in the political environment, and we have to take that into consideration… but it is what it is. And people like you can bring it to the American people’s attention, but honestly, I don’t think it’s going to change. It’s just going to have to be part of what the Romney campaign has to put up with.”