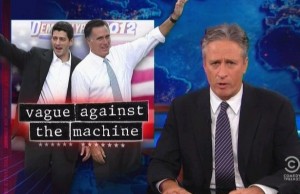 On Tuesday night, Jon Stewart examined Mitt Romney‘s promise to tackle the deficit. A problem, indeed, but what will he cut to achieve his goal? Stewart ran down the check list of programs — having a hard time finding a distinction between Romney and the president. Given that the former won’t tell us…anything.

Romney’s bringing the tough love, Stewart noted, seeking to discover the details of his plan. Starting with Social Security and Medicare. But Romney’s said he won’t make changes to those for people who would be affected immediately or in the near future. Stewart then turned to defense. But rather than cutting, Romney’s promised defense projects.

“Looks like somebody’s raising taxes,” Stewart deduced — before recalling Romney’s vow to cut taxes across the board.

“We get to keep all our stuff and pay less for it?” Stewart asked. It’s like fat-free potato chips!

“Romney, what are you cutting? Anything?” he added. Ah yes: Obamacare. But…he’s keeping the good parts?

“I’m gonna ask you a question,” Stewart began. “Are you a wizard?”

But wait: he’s tackling deductions and loopholes. So which ones? “In fact, Romney hasn’t specified a single deduction,” Stewart said. “Dude couldn’t be more vague if he were an HBO season finale.”

And even his numbers guy doesn’t have the time to explain the math.

On a broader note, however, Stewart observed that the whole situation seemed reminiscent of simpler time. “When the country was also emerging from a gigantic financial crisis, and a bold young man running for his second presidential term was asserting the need for wealthier americans to sacrifice to help pay for popular social programs,” Stewart recalled. “I remember it like it was yesterday.”

Cut to a clip of a speech by FDR, while he was running for reelection — wherein he mocked his opponent saying of course he believed in the likes of Social Security and work for the unemployed. He simply didn’t agree with the way the current administration was handling them.