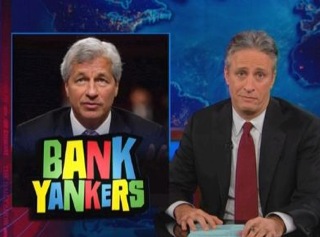 JP Morgan head Jamie Dimon has been testifying before Congress this week as to what sorts of bets with investments his corporation has made, and Jon Stewart recapped the best (and worst) moments of the hearings today, with Republican Senators saying nice enough things to Dimon that Stewart declared, “the person hardest on Jamie Dimon was Jamie Dimon.”

Stewart began by reminding the audience of the “catastrof*ck” the economy went through earlier in the year, and noting that, throughout the disaster, JP Morgan’s leader Jamie Dimon was held up as one of the most trustworthy. “You were Neo, you were The One,” Stewart joked, turning then to the hearings that come from the news that Dimon may have lost something like $7 million in risky bets. With that sort of record, Congress should be hard on him, Stewart noted, but, alas, they told Dimon that he was “huge” and had “lots of firepower” and, in the process, insulted the Senate for all the money they spent.

Sen. Jim DeMint in particular became the brunt of Stewart’s jokes for equating Dimon losing money completely to Congress spending it, and Sen. Bob Corker, as well, for complaining about lack of Congressional regulations and then voting against them. While being a Republican Senator, Stewart concluded, “you get the fun of breaking shit and the joy of complaining the shit you just broke doesn’t work.”