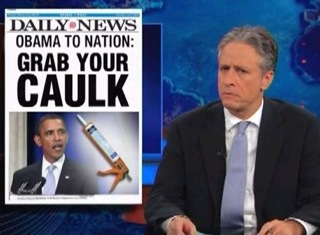 President Barack Obama has made green jobs and green economy plans one of the strongest pillars of his presidency, but with so many problems with the country currently, Jon Stewart turned to the efficiency of a plan he approved of as being “awesome– and minty.” The glitch with the program? President Obama intended to dole out the money for the initiatives to the states, who would better know how to weatherize homes– which Stewart joked was like giving your teenage kids $1,000 dollars, leaving for the weekend, and telling them to weatherize the house with it.

The President’s speech announcing the plan to push for houses to be better insulated to use less energy in the winter months permitted Stewart to make a number of clever “caulk” jokes (see what he did there?), but mostly got Stewart to back the plan. Except for when President Obama noted that the federal government would not micromanaging the money, but giving it to the states. Stewart compared the idea to giving money to teenagers and leaving the house for the weekend, ordering them to weatherize the house: “you’ll come home to kegs all over the house and your daughter wearing your wife’s wedding dress.”

RELATED: Jon Stewart Talks Tough To GOP Base: ‘Your Candidates Aren’t The Problem – It’s You’

So who would be left to make sure the states didn’t squander the money? Vice President Joe Biden, apparently, who spoke sternly about the need to keep the money well-spent… while having some sort of bizarre dirt on his forehead. “It’s either Ash Wednesday,” Stewart joked, “or Biden’s been making s’mores with his lighter.” Stewart also found that the Vice President’s words didn’t even seem to dissuade people in his home state of Delaware from squandering the cash. “Joe Biden couldn’t control fraudulent activity in his own state– a state so small you could weatherize it!” Stewart concluded.