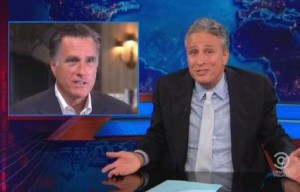 After two weeks away from the studio, Jon Stewart made his triumphant return Monday night by tearing apart every inch of Mitt Romney‘s arguments regarding his not releasing tax returns and the inconsistencies surrounding his time at Bain Capital. Looking at the holes in Romney’s arguments, Stewart skewered the presidential hopeful.

Stewart began with Bain and outsourcing — noting Romney’s previous argument that he wasn’t running things at the firm when the outsourcing took place. Except then those SEC filings happened, showing Romney still held executive titles…but from which he “retired retroactively.” So, Stewart said, it’s basically Romney saying he held “the smoke screenish yet still legal title of CEO and Managing Director who was paid at least $100,000 a year to do what according to me, Mitt Romney, was nothing. That’s the kind of cap and spend business experience I hope to bring to the White House.”

And then there are the tax returns. Romney insists he abided by the law, but that’s not the issue Stewart said. “If you are so-called job creator in the country, even if the jobs you create are in India or China, you are legally entitled to wonderful things like offshore tax accounts” and slashed interest rates. And $77,000 in business deductions for dressage horse competition expenses. In other words, “to send your horse to the fucking prom.”

Here’s the bottom line, he said:

Nobody cares that Mitt Romney is rich. It’s Romney’s inability to understand the institutional advantage that he gains from the government’s tax code largesse, that’s a little offensive to people, especially considering Romney’s view on anyone else who looks to the government for things like, I don’t know, food and medicine.

That view being, “If they want more stuff from the government, tell them to go vote for the other guy.”