Jon Stewart Trashes Fox News For Throwing Out The Constitution: The Law Is ‘No Match For Freedom Math’ 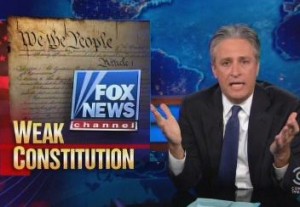 Jon Stewart took on one of his favorite punching bags, Fox News, in a segment calling the network out for always praising the wisdom of the Founders in creating the Constitution, only to discard over half of the Bill of Rights when talking about the aftermath of the Boston Marathon bombings. Stewart noticed every amendment seemed negotiable to people at Fox News except the second, and any legal arguments to the contrary were “no match for freedom math.”

Stewart likened terrorists hating the U.S. for its freedoms to Anne Hathaway: “you hate us, only because you can’t get with this!” He ran clip after clip of Fox News hosts praising the Constitution, only to then show them throwing out the Constitution in talking about the case of the Boston Marathon bombers. On their questioning of whether or not the alive suspect should have been read his Miranda rights, Stewart pointed out he still has them even if they don’t read them, because “you don’t have to say them out loud for them to become real.”

Stewart ran the gamut from treating the suspect as an enemy combatant to calls for torture to even suggesting that the FBI should wiretap all mosques to show how amendments are just being dumped like wildfire. Stewart was particularly struck by Ann Coulter saying the dead suspect’s wife should be jailed for wearing a hijab, remarking “she wants a fashion police state.”

Of course, in the interest of fairness, Stewart showed some Fox News personalities injecting their legal perspective into the mix, but as far as the rest of the network is concerned, the law is “no match for freedom math.” Of course, Stewart noticed the only amendment not being discarded willy-nilly is the second, and wondered what would happen if terrorists decided to establish a well-regulated militia of their own.