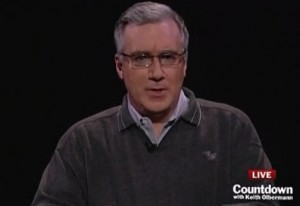 On Wednesday night’s Countdown, host Keith Olbermann took on comparisons of his own cruel remarks about some conservative women with Rush Limbaugh‘s sustained attack on Sandra Fluke, which has prompted an unprecedented advertiser exodus from the conservative radio giant. While Olbermann argued that his offenses were vastly different in character (and not misogynist), he did apologize to conservative pundits S.E. Cupp and Michelle Malkin, and announced the (re)suspension of his “Worst Persons” segment.

Olbermann began by…attacking a woman, saying that one of the “desperate false equivalencies” to the Limbaugh controversy has been leveled at him by “one of the house tamed liberals at Fox News, a supposed Democratic strategist who hasn’t been able to get a job as a Democrat since 2004.” (Powers actually did work on a Democratic campaign in 2005, and has been working as a writer and commentator since)

He’s referring to Kirsten Powers, who wrote a piece for The Daily Beast excoriating the media for applying a double-standard to liberals where sexism and misogyny are concerned. There are a great many things to disagree with in that piece (for example, there have been efforts by liberals to hold these figures accountable), and I do believe her piece gave the false impression that the two sides are equal in this, while ignoring relevant political context, but her overall point is valid, and she wasn’t seeking to excuse Limbaugh. That conservatives have seen fit to do so only underscores the need to hold figures on the left to account.

Olbermann went on to explain two of the remarks that he has been criticized for. In April of last year, Olbermann tweeted, about S.E. Cupp, that “On so many levels she’s a perfect demonstration of the necessity of the work Planned Parenthood does,” which many on the right took to mean that he was referring to abortion, but which I took to be a reference to birth control. Keith cops to my interpretation now, but not at the time. He now acknowledges that it was mean, but not misogynistic. On that point, I agree with him.

In October of 2009, Olbermann referred to influential conservative blogger Michelle Malkin as a “big mashed-up bag of meat with lipstick on it,” which he explains is a reference from HBO’s East Bound And Down, and is not misogynistic because he’s also said it about men. Maybe misogynistic isn’t the most precise term for this, but the addition of the lipstick made the crack gender-specific and inarguably hostile.

In any case, Olbermann apologized to both women, and vowed to retire his “Worst Persons” segment indefinitely. He also promised to try and avoid using “gratuitously abusive remarks about women, and men.”

Is Olbermann being sincere, or is this simply a shaming tactic to score points against Limbaugh? Although he can be slow to do so, he has shown the capacity to make similar apologies in the past, under similar circumstances. In the wake of Ed Schultz’s suspension for calling Laura Ingraham a “right-wing slut,” Olbermann apologized for remarks he had made about Ann Coulter.

Perhaps it’s a bit of both, but his sincerity would tip the scales if he would also apologize to Carrie Prejean, who was subjected to a series of sexually-charged attacks by the host and his guests, or for his handling of the #MooreAndMe social media protest.

There’s an ironic sidenote to this story, one which demonstrates that the difference in the Limbaugh case might not actually be partisan, and which involves a much clearer comparison. Where was the media maelstrom when Glenn Beck said that only hookers depend on Planned Parenthood? Sure, it got the usual doses of partisan outrage, but even though his premise is almmost identical to Limbaugh’s, and even though he is also a huge figure in conservative radio, there was nary a peep from the mainstream media. Are they in the tank for Glenn Beck?

Maybe, or maybe Limbaugh’s sustained 3-day attack came on the crest of an unprecedented wave of conservative attacks on women’s health care that was already receiving white-hot media attention.

Update: Michelle Malkin is, apparently, not buying what Olbermann is selling. She tweets:

Update II: Electric Boogaloo: S.E. is also not buying it. She tweets:

I could hardly hear the “apology” through the din of insults. @mediaite @tommyxtopher

It’s my parents who deserve the apology. They dared to have me w/o consulting PP first. @mediaite @tommyxtopher