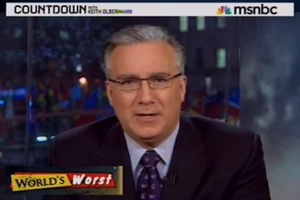 Keith Olbermann was on a roll this past week. After hearkening back to the good ol’ days by calling Bill O’Reilly a “bigot,” Olbermann rounded out the week with by crowning Fox and Friends’ Brian Kilmeade Friday’s Worst Person and, for his comment that “every terrorist is a Muslim,” calling him an “unamerican bastard.”

Score one for Olbermann: looking at the comment in the most favorable light for Kilmeade, he may have been referring to Al-Qaeda operatives or jihadists or some other narrow population of terrorists and used shorthand. That would make his comments, at best, needlessly and offensively sloppy. But there’s nowhere near enough indication that Kilmeade meant anything other than “all terrorists are Muslims,” which is laughable.

But the value (or lack thereof) of Kilmeade’s comments is immaterial to the significant change in rhetoric that Olbermann’s comments demonstrate on the left. The most interesting thing about this segment is, of course, not the fact that Olbermann is taking a swipe at a Fox News personality. It isn’t even the fact that he called Kilmeade a “bastard.” What’s most fascinating about this is that Olbermann– and many more on the left– are now using “unamerican” as a common epithet against those with whom they disagree. Establishing unsatisfactory levels of “Americanness” has long been the domain of the right (think the East and West Coast vs. “Real America”), and rhetorically liberals have been playing catch-up on this front for a long time. They’re finally figuring out that, in American politics, calling someone “unamerican” may be the most effective way to discredit them possible.

Watch Olbermann’s “Worst Person in the World” segment from Friday via MSNBC below: