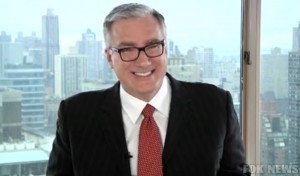 In a videotaped “First Guess” segment for his Fok News Channel, future Current TV tentpole Keith Olbermann taunted departing Fox News tentpole Glenn Beck with a dramatic reading from A Face in the Crowd, from which Beck’s “Lonesome Rhodes” nickname derives. Along the way, though, Olbermann offered his own insight into Beck’s coming departure from FOX, revealed some information about his upcoming show, and displayed the kind of hubris that is the hallmark of either the truly gifted, or the truly narcissistic (or both!)

Olbermann opens the video with the most interesting assessment that I’ve seen, outside of this website. While many have tried to claim Beck’s scalp, based on the available information, it appears that Beck may not have exactly been pushed, nor that he jumped, but more likely a combination of the two. Or as Roger Ailes claimed to the AP “Half of the headlines say he’s been canceled, the other half say he quit,” adding “we’re pretty happy with both of them.”

Olbermann’s insight is that, in acknowledging it, he must relinquish his own credit for Beck’s undoing, and that of Media Matters and Stop Beck (also of Media Matters). That’s some uncharacteristic humility right there.

He does take credit, if only jokingly, for the recent trend of high-profile TV departures, both real and rumored, but draws the distinction that “I will be back!”

Then, Olbermann goes into tempting fate mode by reading a long passage from A Face in the Crowd in which Walter Matthau‘s character predicts Lonesome Rhodes’ gradual descent into oblivion, and calling it a prediction of Beck’s future. The problem is, the soliloquy could as easily apply to Olbermann. He and Beck are on remarkably similar paths, and Beck arguably has a head start, at least in audience size.

When Olbermann talks about Beck possibly overestimating the size and loyalty of his following, he could as easily have been quoting his former colleague, David Shuster, who theorized that Olbermann’s departure was aided by a strong following that “mesmerized” him. When he wonders if Beck’s fans will know where to find him, Olbermann seems unaware of the fact that his show is going to be on Current TV. I literally watch C-Span 3 more than I watch Current.*

If Olbermann’s Current TV show ends up a failure, Beck, wherever he is, will surely replay this clip:

On the other hand, maybe Olbermann really is just that good. One advantage he enjoys over Beck is a much emptier niche. Beck will be competing with a teeming ocean of conservative media figures, while Olbermann will swim a very small pond of liberal figures on TV.

As you can see, Olbermann also revealed some more details about his show, and with them, perhaps some more insight into his own departure from MSNBC. He says of his impending Current TV program that it will be the “same show, same time.” I don’t know if that means it will actually be called Countdown with Keith Olbermann, but it does confirm something I’ve suspected since Olbermann left MSNBC.

Several weeks ago, I asked MSNBC for some details on Olbermann’s departure, specifically why the network had chosen not to continue Countdown, a very successful brand, with a different host. I also wondered if Olbermann had negotiated rights to the intellectual property from the show. They refused to comment, but visitors to FOK News know that, shortly thereafter, Olbermann resurrected his signature “Special Comment” and “Worst Persons” segment for web-only video.

For what it’s worth, I think both Olbermann and Beck will succeed, but Beck’s will be the harder success to judge. Just like MC Hammer was considered a failure when his 2nd album only sold 2 kajillion copies, instead of 12, Beck will be judged against the enormity of his former success.

Olbermann isn’t as sure a bet as Beck, but promises a bigger payoff if he wins. Worst case scenario is he’ll be the biggest star on Current, and wind up feuding with Rachael Ray to get attention. The best case, however, is that he turns Current TV into a huge success, and they build a liberal answer to Fox News around him. By this time in 2013, President Palin could be telling reporters that Current TV is not a legitimate news organization.

*To be fair, I only found out tonight which channel I get Current TV on. Here’s a handy list for you, in case you’re not sure. And before you even ask, no, I have no gorram idea what AT&T U-Verse is. Sounds like a big orange-and-white Bible you can rent for twenty bucks.