LA Sen. David Vitter Is Tired Of ‘Joe Cool’ Obama Being So ‘Laid-Back’ 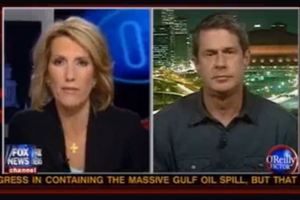 Who would’ve thought in 2008 that President Obama would get into political trouble for being too cool? Echoing a growing sentiment that the president has not responded passionately enough to the disaster in the Gulf of Mexico, Republican Senator David Vitter challenged his coolness last night on The O’Reilly Factor, arguing that he wished to see more anger at the tragedy. He also revealed his “personal nickname” for the president: “Joe Cool.”

Vitter sat down with Laura Ingraham— who was filling in for Bill O’Reilly— from his home state of Louisiana, where the oil slicks are hitting hardest. Expressing frustration with the fact that neither BP nor the federal authorities have been able to stop the oil well on the seafloor from gusing, he argued that President Obama had an attitude problem, but that his disposition was improving– or, at least, becoming more aggressive:

“My personal nickname for the president is Joe Cool. But I don’t want Joe Cool, who’s always laid back and calm and collected in this crisis. I want a leader, I want somebody who’s passionate and absolutely grabs the reigns and takes the reins. The President is beginning to do that more, I’ve seen that ramp up a little bit with the last few visits to Louisiana, but we’re not still anywhere where we need to be in that regard.”

Vitter is not alone in his view of the President; in sunnier days for the President, the only angle SNL could find to make fun of him was how cool he was. Vitter backs up his observation with his concern over job loss in Louisiana now that the oil industry will probably not be allowed to operate there for a while. From that angle, he noted that he didn’t think the president “understands the size of the job impact because these huge rigs are not going to wait around six months or more. They’re going to pull up and move to West Africa or elsewhere. It’s not a matter of six months. It’s a matter of six or ten years.”

Last night’s interview with Ingraham below: