Larry Wilmore Breaks Down Parallels Between Hillary and Khaleesi 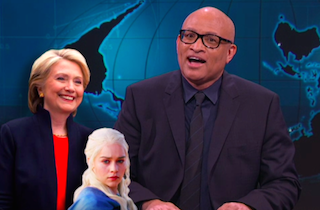 With Hillary Clinton’s big campaign announcement coming on the same day that season five of Game of Thrones premiered, there were plenty of jokes to be made about the parallels between the former secretary of state and the current mother of dragons, Khaleesi. But no one took things quite as far as The Nightly Show’s Larry Wilmore did on Monday night.

“Hillary’s not that far off from Khaleesi,” Wilmore explained, suggesting that she could adopt a line like this as her campaign slogan: “I will take what is mind, with fire and blood, I will take it.”

And the parallels kept piling up from there, in which George H.W. Bush is Tywin Lannister, W. is Joffrey and Jeb is Jamie. Then there is Rand Paul as “dark horse” Stannis Baratheon, who has been “driven crazy by religion.” And also, Hodor:

If you don’t watch Game of Thrones, then none of this will make any sense to you. But if you do, presidential politics just became a lot more interesting.