Late Night Ratings Watch: Week of May 5-May 9
RATINGS 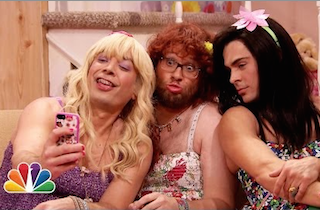 Ratings were down across the board last week for the three network late night shows. But while NBC’s The Tonight Show Starring Jimmy Fallon saw the biggest decrease, dropping 12% to 3.328M total viewers, it still remained on top of its competition.

On YouTube, Fallon and Letterman both scored their biggest hits with videos featuring young, male heartthrobs. Though, Fallon’s sketch starring Zac Efron got about 12 times as many views as Letterman’s segment with James Franco. Meanwhile, Kimmel drew more than 2 million views by asking people on the street if they knew what gluten is.

And, since today’s late night viewers are not only watching on TV, here’s a look at the most popular video for each of the three shows last week on YouTube (as of Thursday, May 15):