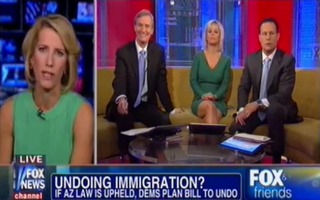 Conservative radio host Laura Ingraham appeared on Fox & Friends on Tuesday where she criticized both Democrats in Congress and likely Republican presidential nominee Mitt Romney for not taking a firmer stand on Arizona’s controversial immigration law. She called a recent move by Senate Democrats to block similar laws by states “a show vote approach to legislation.” When asked why she believed a recent poll showed the Grand Canyon State to be a dead heat between President Obama and Romney, Ingraham said she didn’t believe that had anything to do with “comprehensive immigration reform,” and took Romney to task for not articulating how “businesses that are Latino-owned can grow and prosper.”

Co-host Steve Doocy asked Ingraham for her thoughts on the U.S. Supreme Court’s taking on the controversial Arizona Immigration law passed in 2010, S.B. 1070. “Apparently, [Sen.] Chuck Schumer (D-NY) has got this great idea,” said Doocy. “If they uphold the Arizona law, we need to come up with our own line in the sand that shows that we are behind, what, the illegals?”

“This is another show vote,” said Ingraham. “It’s a show vote approach to legislation.”

“According to a latest poll out, in Arizona in particular, it’s a virtual dead heat in a traditional Republican state,” interjected co-host Brian Kilmeade. “It could have a lot to do with this law.”

“It might have a lot to do with the fact that Gov. Romney on this issue has not articulated, I think, a clear delineation of the way to make sure that small businesses that are Latino-owned can grow and prosper,” said Ingraham. “I don’t think it’s just the immigration argument. I think there are a lot of factors, I don’t think it’s just about comprehensive immigration reform.”