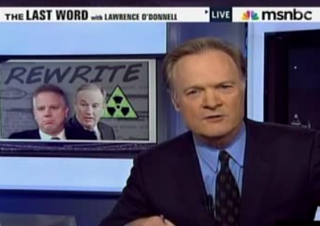 The nuclear emergency currently underway in Japan as a result of last week’s deadly earthquake is some scary stuff– scary enough to make some pundits (ahem, Glenn Beck) wonder aloud whether this is the “end of the world.” In others, however, it appears to have had the completely opposite effect. Take Lawrence O’Donnell, for one, who begged viewers today to believing him, that “this is absolutely, beyond a shadow of a doubt not the end of the world.”

O’Donnell began the segment by attacking– who else?– Bill O’Reilly— proposing that O’Reilly’s skepticism on media coverage of the nuclear disaster in Japan was disingenuous. O’Reilly had decried “the hype” surrounding the potential destruction of a situation “we don’t even know” how to properly assess. Given that no one knows how severe the situation is, O’Donnell posited, it is impossible for anything within the realm of possibility to be “hype.” Unfortunately for O’Reilly, the little that does count as “hype,” according to O’Donnell appears on his very network.

O’Donnell uses a quote from Beck’s radio show to prove that the precise “hype” that has O’Reilly so hot and bothered is coming from his own network, ignoring that, on Fox News, Beck has called the media reaction to the Japanese situation an “overreaction” and is still in favor of nuclear energy. That Beck holds an opinion that fits the definition of “hype” about “the end of the world”– the sort of thing O’Reilly decries in his “Talking Points Memo”– signals to O’Donnell that O’Reilly’s logic is “as empty-headed as usual.” Beck states in the clip that the point of the book of Revelations is so that “we know what it looks like” when the world will end, though Beck also repeatedly states whether or not the world is ending is a question beyond his realm of expertise. But since Beck brought up the Bible, O’Donnell felt compelled to point something out about Revelations: it has no place in the current discussion of what to do about Japan. Revelations, he explains, is a “work of fiction” that describes the acts of a god whose moral disposition is “worse than Hitler.”

Ending the segment with some sage advice (don’t throw away the retirement plan because of Armageddon), O’Donnell departs with a final request: “Don’t listen to Beck. Listen to me.”