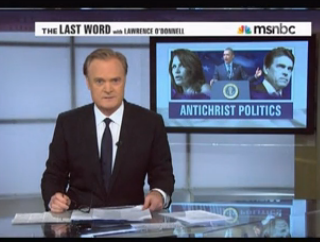 The far right have called President Barack Obama many, many things: from Kenyan to Keynesian, technocrat to terrorist. While some claims were justified and others, by their extreme nature, universally ignored, there was one that never quite made its way around, and yet merited an entire segment of The Last Word tonight: the claim that Obama is “the Antichrist.” Along with columnist Matthew Sutton host Lawrence O’Donnell explored the possibility of this being true and where the ball got rolling on this claim.

Sutton sparked this debate once again with a column in the New York Times entitled “Why the Antichrist Matters in Politics,” and, being an apparent expert on the subject, O’Donnell asked him to start at square one and explain what the Antichrist is and how President Obama fits that. Sutton, a historian working on a project on pre-WWII America, found that there were too many parallels between President Franklin Roosevelt and President Obama in terms of ideology and charisma. Both Roosevelt and Obama, to Sutton, fit the mold of the Evangelical understanding of the Antichrist– which O’Donnell is careful to point out is a character that evangelicals want to see appear, because it means the world is closer to the Rapture.

The two also looked at campaign ads from 2008 that shot at Obama as a superficial charismatic leader with little substance. While Sutton acknowledged the attacks were against “Obama as celebrity and Obama as superstar,” he also considered that image to be one of “a twenty-first century kind of leader which raises certain suspicions” by promising peace and prosperity with enthralling language and then not backing those claims up. Neither of the two really bring up any specific instances of any Obama opponents calling him the Antichrist or connect this evangelical perspective to any particular party, but the message of who would believe this if they did– and giving the claim that President Obama is the Antichrist its own segment certainly suggests O’Donnell thinks people believe this– is crystal clear.