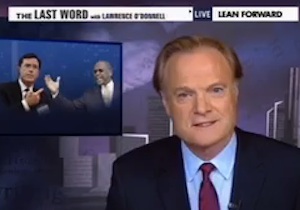 “This is all the product — the predictable product, I guess, of the Citizens United ruling by the United States Supreme Court, this out-of-control SuperPAC environment,” O’Donnell observed. “Do you think Stephen Colbert is helping by showing how crazy this has become or is he letting people relax about it and thinking it’s just kind of funny and turning it into something too light?”

“Never underestimate the affect of satire in politics,” Reich proclaimed. “I think it does have a positive effect, but when you come right down to it, this is not a joke. I mean, SuperPACs, money in politics — completely out of control right now and it all does go back, not just to what the Supreme Court did two years ago, 5-4 majority, Citizens United against the FEC, saying essentially that corporations are people, and then also combined with the prior Supreme Court case that said money is speech. Well, if corporations are people and money is speech, the net effect is to open the floodgates to money in politics right now in a way that we haven’t seen in this country for over 100 years…I mean, essentially we’re losing our democracy. i don’t want to be overly dramatic about it, but that is the only thing that I can say. we are — we have to take our democracy back, Lawrence.

“Colbert has handed the PAC over to (Jon) Stewart so he can say that Romney line, ‘I have no control over this SuperPAC,'” O’Donnell noted. “I mean, he’s doing everything that highlights what’s wrong with these SuperPACs — where do we begin to try to get control of this?”