Lawrence O’Donnell: Why Do Conservatives Go After Teachers’ Unions And Not Police? 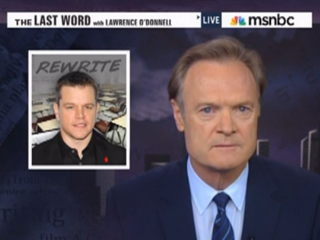 Matt Damon‘s appearance at a pro-teacher rally in Washington this weekend has reinvigorated the debate between those who view teachers as holding cushy jobs with excessive benefits and those who are appreciative of the intensity of the career. Lawrence O’Donnell made clear tonight he is staunchly on the latter team, admitting his academic failure– as a writer, of all things– had nothing to do with his teachers’ abilities, and wondering why those who want to crack down on teachers don’t go after police unions, too.

“When I brought home a bad report card, it never occurred to me or my parents to blame my teacher,” O’Donnell noted, Instead, “the problem was I just didn’t study hard enough or, in some cases, I didn’t have much aptitude for the subject,” like chemistry or, ironically, writing. “None of the teachers who tried and failed to teach me how to write should be blamed for my failure as a writing student.” Because of the unpredictable ways people learn things, he concluded, often many who are talented find no solace in the classroom– this, he continued, was particularly true with classrooms geared towards standardized testing excellence. This is a sentiment that Damon echoed in his speech at the rally on this weekend.

O’Donnell played the contentious clip and noted the argument the Reason.tv reporter made comparing public school teacher incentives to the incentives of movie stars,” which he found patently absurd. It has never occurred to the teacher haters,” O’Donnell argued, “that teachers want to be teachers for any other reason than job security– that teachers might want to be teachers because they like teaching, because they love teaching, and because they care about their students.” He then noted another group of public servants that seem to get a pass in a way teachers never do from the right: police officers. Even though “police officers carry guns,” their benefits are never up for debate the way teachers are.

O’Donnell clarified that this was not an attack on the police, but a comparison to highlight the absurdity of the attack on teachers. “The worst teacher in America could never do the same damage than the worst police officer in America,” he noted, but yet the right exhibits no “curiosity” about them. This, to O’Donnell, proved that “the targeting of teachers has been a vicious and politically deliberate action,” as the National Education Association has been staunchly Democratic for years.

Matt Damon didn’t go as far as to discuss the political backdrop to this but, rather, stuck in his speech to praising teachers for the dedication they showed in helping shape him growing up, a speech O’Donnell praised as the only speech worth hearing given in D.C. this weekend (which, given the number of speeches on the debt ceiling were given this weekend, is a fair assessment).