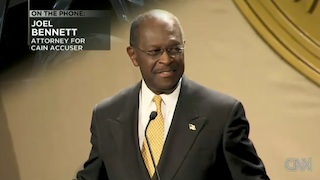 Yesterday, a story broke that one of the women who accused Herman Cain of sexual harassment during his time with the National Restaurant Association wanted that organization to lift the non-disclosure agreement from the resulting settlement so that she could now speak about what had happened. Last night on Anderson Cooper 360º, the woman’s lawyer, Joel P. Bennett clarified his earlier statements, saying that the woman was “mulling over” whether or not she wants to speak out and that she is “very upset” with Cain’s response to the story.

Bennett spoke to a CNN panel via the phone and described the woman’s feelings:

“Naturally, she’s been very upset about all of this since the story broke last Sunday because Mr. Cain has been giving the impression that she’s someone who came out and made false allegations and that’s certainly not true. She’s still deciding, once we hear from the Restaurant Association what she’ll do if they waive the confidentiality. Until they do that, she’s not going to speak out.”

While Bennett couldn’t speak in any specifics (both because of his client’s privacy and because he hadn’t looked at the physical settlement in many years), he did let loose a number of interesting details. Here are a few:

Watch the interview from CNN below. It is broken up into two parts.