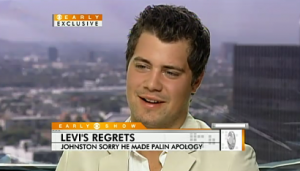 While introducing The Early Show’s exclusive interview with Sarah Palin’s almost-son-in-law, anchor Erica Hill warned viewers that we’re all “about to see a whole lot more of Levi Johnston.” Considering the guy posed for Playgirl, that’s saying a lot. Still, it’s definitely true as he’s got both a reality show and a mayoral campaign coming up. Not to mention the fact that, now that he’s finally separated from the Palin clan for good (except for, y’know, that whole child thing), he can speak freely about the big Mama Grizzly. He began his new-found freedom by completely retracting his apology to the family.

Johnston said the apology was his only regret because it made him sound like “a liar.” Not only that, he implied, to CBS’ Betty Nguyen, that he hadn’t even written it. From CBS News:

“‘That was,’ he told Nguyen, ‘something I did to make my fiancée happy. You know, she wanted it. So we wrote something down and we sent it out because that’s what she wanted.’

‘Did she write it or did you write it?’

‘I’m not gonna get into all that. But I’m just gonna say that, together, we put it out there.’

Why would he say something if it wasn’t true?

‘Trust me, it’s easier to make them (the Palins) happy. … If you gotta live with them, you gotta make them happy.’

While this may sound like an unnecessary swipe at the family, you do kind of have to remember that, outside of all the politics and TV cameras, this is really just a guy talking about the parents of his ex-fiancee. Not an easy conversation to have in any case. I mean, imagine if a news crew tried interviewing you about some of your exes? And even if he failed to be entirely cordial, it at least seemed like he gave it a bit of a try. When Bristol and her burgeoning TV career came up, you could see a whole cloud of bitterness cross his eyes and we can only assume that there were much worse things he’d like to say.

But some of that bitterness did manage to squeak through when Nguyen asked him about Bristol’s accusations that he was “obsessed with fame”:

“In an interview with People magazine, Bristol accused Johnston of ruining their relationship with his hunger for fame, saying he’s obsessed with the limelight and, as Nguyen put it, ‘that she was played.’

‘I don’t think I’m any more obsessed with making a career out of this than she is,’ Johnston countered. ‘Obviously, she’s doing ‘Dancing with the Stars.'”

Love him or hate him, that is a fair point.