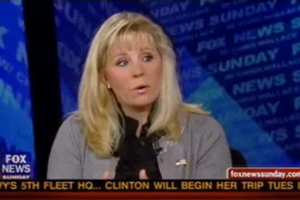 Liz Cheney is often about as strong an ally as the Bush administration can hope for in cable news. A veteran of the state department with family ties to the Vice President, most of her commentary tends to support the choices of the administration for which she worked. But this weekend on Fox News Sunday, she candidly admitted that the blame for a “policy of weakness” for which she blamed some of North Korea’s aggression fell on the shoulders of President Bush.

Asked by Chris Wallace about recent tensions on the Korean peninsula, Cheney was not shy in pointing out that she believed their decision to become more aggressive against South Korea was a response to the lack of consequences in the past for their behavior. And by the past, she not only meant the work of diplomats under President Obama:

“What we’ve seen there is an example of how provocative American weakness can be. And I think that, unfortunately, it is a policy of weakness that has expanded back into the Bush administration, into the last years of the Bush administration. I think that, we’ve seen time and time again– North Korea, if they test a nuclear weapon, there are no consequences. They build a reactor for the Syrians, there are no consequences. And what they’ve learned is that their belligerence in fact oftentimes yields from us capitulation and concessions. I think it’s time for us to put them back on the terrorist list.”

This also led Cheney to emphasize the need to take a strong stance in negotiating with China, North Korea’s biggest ally, lest they prefer to see “nuclear proliferation in your neighborhood.”

The segment from Fox News Sunday below: