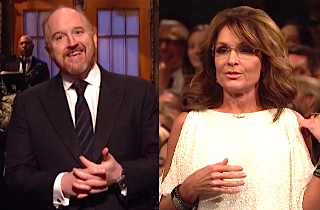 It’s been close to five years since Louis C.K. got drunk on an airplane and tweeted the foulest things he could think of about Sarah Palin. Since then, he has moved on and deleted his Twitter account, but as the comedian told Howard Stern on Wednesday, it was just two months ago that he finally decided to apologize.

As Louis C.K. told it, Palin actually approached him at the afterparty for Saturday Night Live’s 40th anniversary special to tell him she thought he was “terrific” and “really funny,” though it was unclear if she really knew who he was.

In response, Louis C.K. just said, “I owe you an apology,” telling Stern that he’s never before apologized for anything he’s said and “fuck anybody else who’s offended.” But now that he was face-to-face with Palin, he felt he needed to address the situation.

When he explained to her what he had done, Palin told him, “Well, you’re a vile person,” which made him laugh. Then she invited him to go fishing with her next time he’s in Alaska, which he said he would do in a heartbeat.

RELATED: Sarah Palin to Hecklers Outside SNL40: ‘Get a Job!’

Stern and Louis C.K. agreed that Palin is attractive and they both kind of want to “fuck” her. “It would be fun to fuck a conservative politician,” the comedian said, noting that opposites attract for a reason. This conversation led Stern to admit that he also fantasizes about sleeping with Megyn Kelly and Kimberly Guilfoyle from Fox News.

After Louis C.K. sent the offending tweets, he actually had to back out of an offer to host the White House Correspondents’ Dinner because media figures like Greta Van Susteren said they would boycott the event if he were the emcee.

But if he managed to get back in Palin and Fox’s good graces with his personal apology, this appearance on The Howard Stern Show may have put him back where he started.