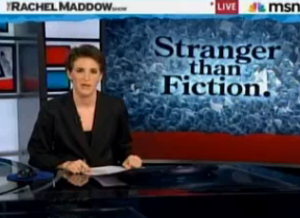 Rachel Maddow took the opportunity tonight to really go after Glenn Beck, and did so without really criticizing him directly as much as merely using Beck’s own words against him. Given Beck’s serious concern about the implications of the Egyptian uprising, Maddow proves this isn’t the first time Beck has sounded catastrophic alarm bells.

First Maddow defined opportunistic individuals as those who support an idea and then use current events to justify bringing about their proposal no matter what the circumstances might be. For instance Republicans will always advocate for lower taxes no matter if the government has a surplus or a deficit. Similarly, former U.N. Ambassador John Bolton will always suggest that now is a good time to bomb Iran, whether it’s a “random Tuesday” or as a result of the turmoil in Egypt.

With this as background, Maddow then showed multiple videos of Beck describing the uprisings in Egypt as evidence of the “coming insurrection.” Maddow concluded:

“For Mr. Beck and for others who see a direct ratio between their own success and how afraid they can make their audiences, it turns out that an uprising in Egypt is even better evidence of this being the end of the world than say the last evidence we had, which was President Obama passing Wall Street reform last July.”

By then showing video of Beck getting equally angry about the financial regulation bill, Maddow delivers an effective and hard to defend against blow. She’s not really attacking Beck, well maybe she is, but what she more convincingly accomplishes here is simply raising doubt about how serious one should take Beck in the future if he gets this apoplectic so frequently.

Then in a final moment where she admits her own recent mistake of confusing satire for something real, Maddow delivers a final jab at Beck by referencing his “analysis” regarding China’s expansion plans:

“In a world where China taking over New Zealand is what passes for real analysis on the situation in Egypt, how do we know that’s not satire too?”