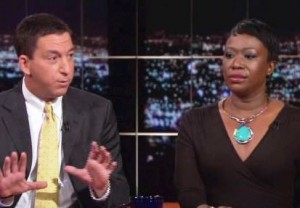 On his Friday night show, Bill Maher invited his panel to discuss this week’s developments about Benghazi — debating whether the story is as scandalous as Republicans are making it out to be. Maher, for one, couldn’t understand exactly what the outrage is about. But some of his guests begged to differ.

“I still don’t know what the scandal is,” Maher lamented.

The Guardian’s Glenn Greenwald examined the media spectrum’s initial take on it — Fox News deeming it a major scandal and MSNBC arguing the White House didn’t err — and stated that neither extreme was accurate. It’s not a massive scandal the way the right has said, Greenwald argued, but the administration did put forth information that was untrue, whether intentionally or mistakenly. And that does merit investigation.

It’s “a prototypical Washington scandal,” Joy Reid chimed in. “It’s a scandal about a memo.” The “bombshell” was an edited memo, she noted, asserting that it demonstrates how “desperate” Republicans have become. Her argument immediately drew disagreeing looks from National Review’s Charles Cooke, who contended that the “media sides with power.”

“Obama’s supposed to micromanage everything that happens in the world?” an incredulous Maher asked. Greenwald and Cooke pressed further, arguing that there is a valid issue that should not be readily dismissed. Maher was “bored” with the discussion.

…and thus moved on to the religious aspect of it, citing the anti-Islamic video the attack was initially blamed on. Every time we overthrow a Muslim government, he observed, it seems like it’s worked: “Theocracies are actually dictatorships themselves, aren’t they?”

To that point, Cooke pointed to various revolutions, contrasting how the “great” American one was different from the many others that are bloody and horrible. Immediately, Reid questioned how the revolution was “great,” citing slavery — arguing that revolutions inherently are messy.

“We play a significant role in what’s been happening in the Middle East because we’ve been interfering in and dominating that region,” Greenwald charged. It’s not all our fault, he added (noting that other religions are associated with violence as well), but we should take a lot of the blame.

Take a look below: