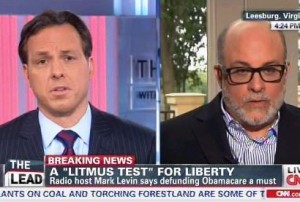 It’s rare to see conservative radio host Mark Levin make a television appearance, and even rarer to do it on a network that isn’t Fox News, but nevertheless Levin appeared on CNN’s The Lead on Friday, reacting to President Obama‘s impromptu address on an impending government shutdown, telling Jake Tapper that the president’s a “serial liar” and bashing “French Republicans” selling out their own party.

Levin mimed a yawn in reaction to Obama’s phone call with Hassan Rouhani, noting the irony of Obama being willing to engage with the president of Iran then turning around and talking about Republicans “as if they’re holding hostages.” On Obama calling Congress undemocratic for trying to undo Obamacare, he sarcastically mused, “So the only Congress that was democratic was the one that passed Obamacare,” and dismissed Obama’s “scare tactics.”

Levin also bashed “French Republicans,” defining that term as a Republican who “beats up on conservatives and is constantly praising the Democrats,” then turns around and pretends to be a conservative. He dismissed the severity of a government shutdown, while Tapper asked why it would be “fair” for Republicans to use the debt ceiling as a “bargaining chip.”

Tapper noted Obama’s argument that Republicans are the stubborn ones saying “my way or the highway.” Levin said both parties are to blame to a certain degree, declaring that “this whole federal system is completely out of control.”