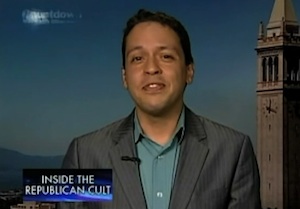 Keith Olbermann opened the latest chapter in his itinerant broadcasting career last night, and introduced as a contributing guest Markos Moulitsas, founder of DailyKos, to his new program. Moulitsas was on to ostensibly explain why he stopped appearing on MSNBC roughly a year ago, but ended up using the reclaimed platform of a broadcast medium to antagonize his former allies at MSNBC, especially Morning Joe Host Joe Scarborough, to whom he referred as a “loser.” #Newtone.

“I got in a little Twitter war with him, and apparently I made him cry,” said Moulitsas about the reasons for his blacklisting from MSNBC before adding “He decided I would not be allowed on MSNBC until I apologized.” Moulitsas appeared to still be pretty angry for the isolation from cable news, demonstrating that by insulting Scarborough “I found it bizarre that the lowest-rated morning-show host in cable news was dictating the guest list on the only show on cable that cracked Fox News’s stronghold on the top ten — yours.”

When he started out on MSNBC, Olbermann pioneered the cable news maxim of “punching up” (in relative weight class of relevance) by relentlessly, and perhaps not always fairly, going after the more highly rated Bill O’Reilly on Fox News. But last night, Olbermann seemed to develop a new tactic in this strategy: punching up by proxy.

The Daily Kos founder seemed all too eager to get back at MSNBC, specifically Scarborough, in a manner that seemed from at least one disinterested viewer both petty and small-minded. In Moulitsas’ view, the notion that he would have to apologize to get back on MSNBC for something as common as a Twitter feud seemed rather beneath him. But It doesn’t appear that it was just a Twitter feud, but rather the specific allegations made by Moulitsas that were deemed offensive.)

Any moral high ground Moulitsas was trying to stake out seemed to be quickly lost as he threw insults towards Scarborough and MSNBC. The good news for Olbermann, however, is that at least his guest made for at least one compelling moment in his program. So kudos to Olbermann and Moulitsas for stirring the pot.

Watch the video below, courtesy of Current: