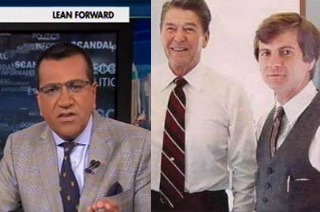 On Wednesday night, MSNBC’s Martin Bashir made the ludicrous assertion that the Republican Party as a whole is reaching for coded ways to attack President Barack Obama’s race by expressing concerns over the news that half the American public was singled out for harassment by the ostensibly neutral revenue collecting arm of the federal government. The embarrassing baselessness of this charge is self-evident. However, in order to make this claim, Bashir cited a 1981 interview with Ronald Reagan strategist Lee Atwater who, the host suggested, revealed details of the GOP’s campaign of stoking racial animus in the Deep South in order to elect conservative politicians. In the process, Bashir selectively edited Atwater’s remarks in order to make them appear more sinister than they really were.

RELATED: Bashir: ‘IRS’ Is The New N-Word In The ‘War Against The Black Man In The White House’

In 1981, Atwater, a South Carolina native, sat down for a 1980 campaign postmortem interview with Alexander Lamis, a political scientist at Case Western Reserve University. The 40 minute interview is a raw, unfiltered, and fascinating glimpse into the world of realpolitik that guides campaign professionals.

Listen to the interview here:

On Wednesday, Bashir referenced the transcript of a portion of that interview:

You start out in 1954 by saying, “N***er, n***er, n***er.” By 1968 you can’t say “n***er”—that hurts you, it backfires. So you say stuff like, forced busing, states’ rights, and all that stuff, and you’re getting so abstract. Now, you’re talking about cutting taxes, and all these things you’re talking about are totally economic things and the byproduct of them is blacks get hurt worse than whites… “We want to cut this,” is much more abstract than even the busing thing, uh, and a hell of a lot more abstract than “N***er, n***er.”

This isolated remark from a more than 40 minute conversation clearly lacks important context:

Atwater began the interview by asserting that race and party were the dominant issues in the South prior to the 1964 Voting Rights Act. Following that, Southern voters became focused on the economy and national defense — in a sense, setting a trend for the nation because (with the exception of the Vietnam War) much of the Northeast, Midwest and West were still focused on local issues like agricultural and industrial policy in the 1968 and 1972 presidential elections.

The South in 1964 was considered reactionary, Neanderthalic, and so forth because we weren’t mainstream on not only on the race thing but on economic issues and national defense and all. We were considered, you know, ultraconservative and everything.

What happens is a guy like Reagan who campaigns in 1980 on a 1964 Goldwater platform, minus the boo-boos and obviously the Voting Rights Act and [Tennessee Valley Authority] and all that bullshit. But, if you look at the economics and the national defense, what happened is the South went from being behind the times to being mainstream.

The Reagans did not have to do a Southern strategy for two reasons: number one, race was not a dominant issue, and, number two, the mainstream issues in this campaign had been quote “southern issues” since way back in the ‘60s

“So, Reagan goes out and campaigns on economics and national defense. The whole campaign was devoid of any kind of racism. Any kind of reference,” Atwater continued.

He went on to chide white Southerners for their lack of knowledge of the true impact of the Voting Rights Act on American voting patterns. “There’s just no interest and no intensity on that thing among white voters,” Atwater said with an audible hint of derision.

Atwater goes on to say that the “Southern strategy,” as it was understood at the time, was really a play for white blue-collar voters. Those voters went for John Kennedy in 1960 and Barry Goldwater in 1964, but they went for George Wallace in 1968 – a candidate who also won urban white voters in the North’s declining industrial bases as well as the rural south by appealing to notions of alienation.

After supporting Richard Nixon‘s reelection bid in 1972, those blue-collar voters flipped and cast their ballots for Jimmy Carter in 1976. Atwater stresses that blue-collar voters have always been attracted to “the most conservative guy on fiscal matters” or “the toughest son of a bitch on national defense and foreign policy.” Regional pride issues also attracted low-education white voters, Atwater said with yet another note of disdain.

He goes on to note that the VRA would have been a major issue in the South in 1968, but, by 1980, Reagan did not have to run a regional campaign. His national themes of a strong defense and a renewed focus on fiscal conservatism carried the South as it did the Midwest and the West.

At this point, Lamis interrupts Atwater. Lamis notes that the fiscal debates of the 1980 campaign – reforming welfare and the food stamp program, for example – have an undeniable racial element to them. Atwater answers his question “as a statistician.”

You start out in 1954 by saying, “Nigger, nigger, nigger.” By 1968 you can’t say “nigger”—that hurts you, it backfires. So you say stuff like, forced busing, states’ rights, and all that stuff, and you’re getting so abstract. Now, you’re talking about cutting taxes, and all these things you’re talking about are totally economic things and the byproduct of them is blacks get hurt worse than whites. And, subconsciously, maybe that is part of it. I’m not saying that. But I’m saying that if it is getting that abstract and that coded then we’re doing away with the racial problem one way or the other, you follow me? “We want to cut this,” is much more abstract than even the busing thing, uh, and a hell of a lot more abstract than “Nigger, nigger.”

A report by The Nation’s Rick Perlstein, in which the audio of the interview is published, omits the portion in bold – a crucial bit of context. Bashir’s segment also omitted this exculpatory aside.

What Atwater is saying in the omitted portion of this interview is that, by 1980, overt appeals to racism had lost their efficacy. In the midst of a clinical evaluation of campaign strategy, Atwater digresses to contend that racism both exists and is no longer an effective tool for campaigners.

At the very least, an honest appraisal of what Atwater is saying is that a racial strategy is not a prudent course for campaigners in the South. And this was 30 years ago. To misquote him in order to attest that he was referring to circumstances relevant today is misleading at best.

At the very least, Bashir should issue a correction.