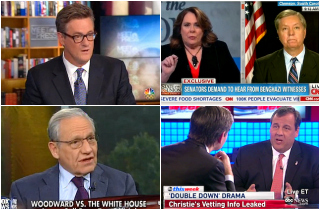 You were probably up late watching Alabama beat what somebody in my viewing party called the “yellow bee team” Saturday night, so you didn’t rise with the Lucky Ol’ Sun to catch the Sunday political shows the following morn. As always, your humble Mediaite scribe was staring at the omidirectional boob tube on your behalf, and faithfully recorded what transpired there.

Chris Christie had himself a grand ol’ Sunday. You may have heard he won some election the other day, by so many votes he must have had all the ACORNs driving zombies to the polls, and he was rewarded with four gilded invitations to the Sunday shows, where nary a difficult question was to be heard. Christie got to take credit for “getting things done” and “solving problems” and “ignoring the games down in Washington” and not subscribing to “labels,” and a whole wheelbarrow of other empty phrases that would crumble under the slightest scrutiny. Good thing Christie didn’t face any:

His “we just gotta be bipartisan, dagnabbit” schtick, however vapid, seems to be getting through. Joe Scarborough repurposed his M-F “conservatives need to, like, win” act for the weekend, which is nothing special. But then Rick Perry, who’s so conservative he’s been posing as Moderate Clark Kent Perry, sideswiped the tea party, saying, “If you can’t win elections, you can’t govern.” Governor Glasses, mind you, never lost an election until 2012, though you’d be hard-pressed to call the slip-n-slides he went through in Texas elections.

Still, Perry’s spent the past few years reaching so far to the right he’s in danger of going all the way around giving himself a wedgie. For a guy like that to feel the need to score some points off the tea party suggests Christie’s victory really is echoing throughout the halls.

Bob Woodward, claiming he invented the idea that “Obama doesn’t lead.” Next week, he’ll say he came up with the narrative that “both sides do it.” Seriously, who tries out for First Chair of Conventional Wisdom?

Meaningless Cliché Salad of the Day:

Mark Halperin on Meet the Press:

“It’s a huge fight and the parties have to sort it out. It has to be done by leaders. It can’t be done by cable TV or the internet or Twitter. Chris Christie is someone who is magical in the way politicians can be magical. People like having him on TV, he’s a good talker. He won. Joe said winning is what really matters. He loves to win. He’s going to take over the Republican Association and see if he can win there. And he wants to be a leader to change the party. You can’t say that about everybody else people are talking about for ’16.”

Chris Christie wins because he leads like leader who wins, but also magic, in a leadership way, with leading and winning, but not on the internet. Near as I can tell, Double Down is 500 pages of that nonsense.

Best Reaction to an Empirical Refutation of Your Argument

Senator Lindsey Graham (R-SC)—who was so outraged by the 60 Minutes report on Benghazi two weeks ago that he’s been holding up all Senate nominations until he gets interviews with survivors—on whether he will relent now that the 60 Minutes story has turned out to be bogus: “Nah.”