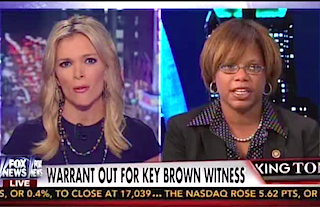 Missouri State Senator Jamilah Nasheed, one of the leading forces behind the effort to get St. Louis County Prosecutor Robert McCulloch to recuse himself in the Michael Brown shooting case, joined Megyn Kelly on Fox News Thursday night to explain why she believes he’s the wrong man for the job.

“That is the sentiment of the people that are on ground zero,” Nasheed said of her campaign. “Many of them feel like they need justice. And the only way justice can be served is that Bob McCulloch step aside and allow for the confidence to be built within that community.”

Kelly countered by pointing out that McCulloch has been elected four times by the people of St. Louis County, “so it seems clear that he does have the faith of the people of this county.” When Rasheed said he didn’t get the black vote in his most recent election, Kelly asked, “Does he need to have both the black vote and white vote in order for him to have your trust?”

“How are you going to find somebody who African-Americans do trust? And what if the white community doesn’t trust that person?” Kelly asked later. “That’s why we have elections for these positions.”

As Nasheed continued to express her opposition to McCulloch, Kelly shot back, “For better or for worse, that is how people get elected. That’s how the community says whether they believe in them or not via the elections, as you know yourself because you have won state elections there in Missouri.”